DSLR or SLR with a “D”. Well as a old school photographer, I still call it SLR. Lets first understand what is SLR, and why it is called so. SLR stand for “Single Lens Reflex”. When you look through the viewfinder, you actually look through the same lens which takes the picture. This is because we see a reflected images through mirror which sits at 45 degree angle and a pentaprism. The configuration between the mirror and pentaprism works like a periscope. The real image bounces off the lower mirror on to a translucent glass which works as a projector screen. The job of the prism is to flip the image on the screen so that it appears right side up again and redirect it on to the viewfinder. When we press the shutter, the mirror flips out of the way and the image is recorded. Therefore we see the actual image which the camera captures. The mirror is connected to the shutter timer system, so it stays open as long as the shutter is open. This is exactly the reason why the viewfinder screen is blacked out momentarily when the shutter is open. 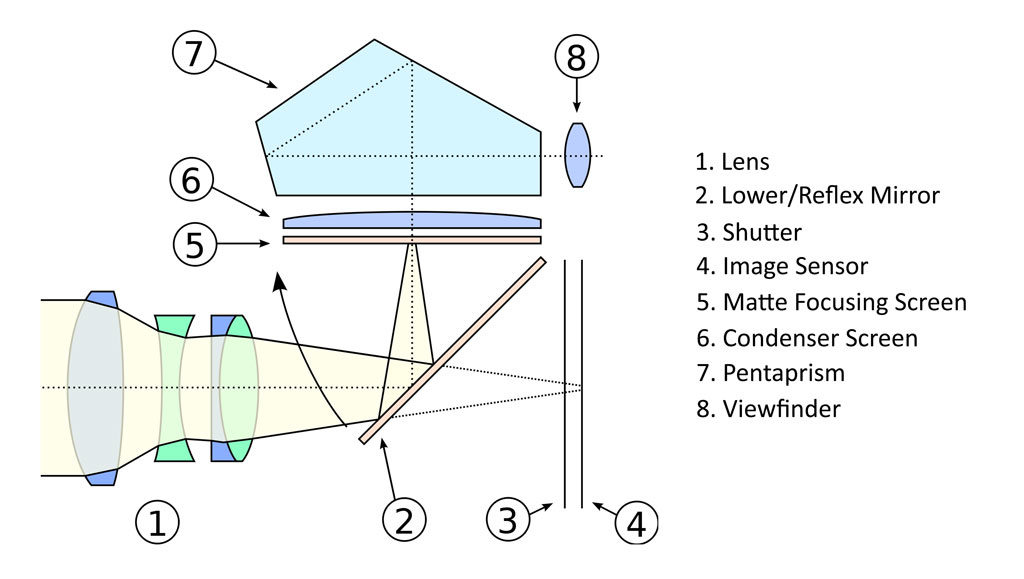 Now let’s understand what is “D”. No.4 in above image use to be film in earlier days which is now replaced by an image sensor.  “D” stands for Digital. A Digital Single Lens Reflex (DSLR) is a Single Lens Reflex camera where the image is recorded digitally. Rest everything is remains same (broadly).

A DSLR has a very complex mechanism. So many things happen simultaneously when you press the shutter button. With the half press of shutter button the camera focuses. With the second half of the shutter release, the aperture closes down as per the desired f number, mirror goes up, shutter opens and the image gets sensed by the sensor. Once the image is sensed by the sensor, the image gets processed with a complicated algorithm, and gets transferred to the memory card through the buffer memory. The entire process happens as quickly as 11 times in a second (in some camera).

There are some distinct features of a DSLR which makes it different then other camera.

The most important and widely ignored element while buying any camera. The size of the sensor in any of the camera determines the detailing in the image. A sensor used in current DSLRs, whether it is full frame (same size as 35mm, 24X36 mm) or APS-C ( approx 23X15 mm) is much larger than most of the most of the compact camera available in the market.

A sensor is a solid state device which captures light in a digital camera. It uses wafers of silicon as the base for the integrated circuit which are built up via a process called photolithography. This is where the patterns of the circuitry are repeatedly projected onto the wafers before being treated so that only the patterns remains. This process creates millions of tiny pixel and in each pixel there will be light sensitive elements which can sense how many photons have arrived at that particular location.  As the charge output from each location is proportional to the intensity of the light falling onto it, it becomes possible to reproduce the scene as you originally see.

CCD Sensor: Charged Coupling Devices. The first digital camera used CCD sensor. They’re made through a special manufacturing process that allows the conversion to take place in the chip without distortion. This creates high quality sensors that produce excellent images. But, because they require special manufacturing, they are more expensive than their newer CMOS counter parts.

CMOS Sensor: Complimentary Metal Oxide Semiconductor. This uses transistors at each pixel to move the charge through traditional wires. This offers flexibility because each pixel is treated individually. Traditional manufacturing processes are used to make CMOS. It’s the same as creating microchips. Because they’re easier to produce, CMOS sensors are cheaper than CCD sensors. Because CMOS technology came after CCD sensors and are cheaper to manufacture, CMOS sensors are the reason that digital cameras have dropped in price.

That was little technical but worth knowing. Now let’s understand, does the size of the sensor matters? The answer is a big YES. The size of the sensor ultimately determines how much light it uses to create an image.  A bigger sensor captures more information, better dynamic range, less noise and improved low light performance.  So large sensor help you to capture better quality image. A large sensor can also be better for isolating a subject in focus while leaving rest of the image blurred. 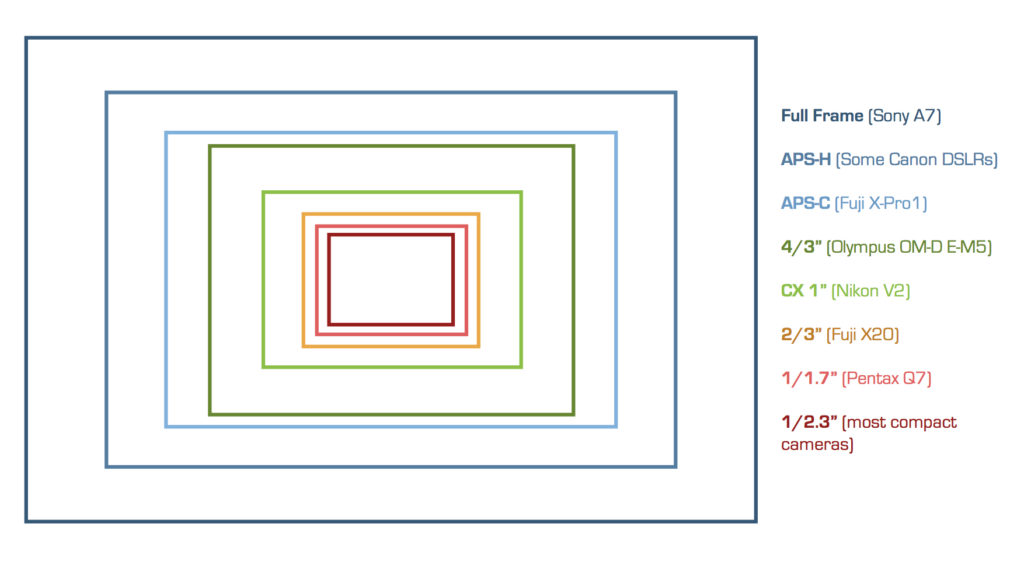 The main reason why it is called a Single Reflex Camera is the viewfinder. SLR principle uses the mirrors inside the camera to project exactly the same which is going to be recorded by the camera.

DSLR enables you to change your lens according to need. The lens can be changed or swapped out with other lens. This feature helps user to use a wide range of viewing angle with different set of lenses. However general purpose lens that covers the same range which a compact camera lens but the optical quality of these lenses are better. The actual power of this feature is when you use specialized lenses.

We will discuss different type of lenses in Lens section.

Every camera manufacturer has a specific lens mount and only compatible mount lens can be used.  However there are some 3rd party lens manufacturers who makes lens for all different camera mount.

One important aspect has to be understood is that lens uses different size glass for different sensor size camera body. A full frame DSLR lens will use bigger glass then an APS-C DSLR because it needs better area to cover. Therefore a full frame lens can be used in an APS-C DSLR but cannot be used otherwise.

A DSLR is most widely used camera by professionals around the world. The image quality is much superior because of the larger sensor size. With consistent improvement in the camera build quality and advance features, the DSLR is considered to be one of the rugged camera available in the market.