The Reisekamera(German) or Chambre de Voyage( French ) is a wooden bellows plate camera . A subgroup of the 19th century wooden field, travel cameras”.

Most collectors associate a distinct kind of tailboard camera architecture with the term Reisekamera, but some of these travel cameras had front panel focusing instead of the tailboard cameras’ rear focusing. Originally Reisekameras was intended for professionals outdoor camera for portraiture, architectural work, documentation , gardens, homes or museums. They also had to carry a tripod and, in the early years, a dark tent, chemicals and trays for preparation and development of the plates for the wet-collodion process. This camera conception became more and more popular among amateurs, especially after the dry plates became available. 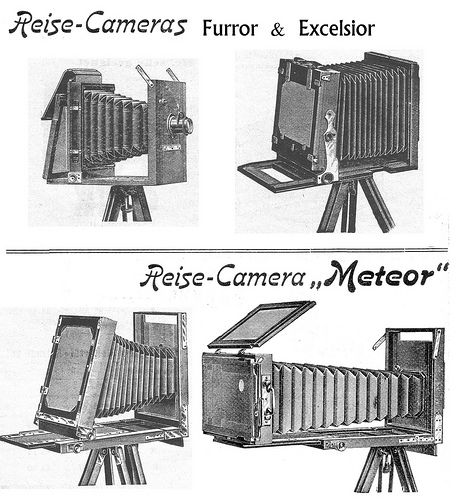 The Reisekamera, believed to have originated in central Europe, influenced by, and to a high degree perfected in Germany from 1860, reached its peak popularity between 1895 and 1914.