A correct exposure is a combination of three elements. Aperture, Shutter and ISO. It has remained unchanged since the beginning of photography.  In the film era, we use to have different ISO films, but in digital camera, we can change the ISO of our sensor.  These three elements of exposure triangle work together for a desired result.

Before we go into the details of exposure triangle, let’s understand the term STOP in photography.  A stop is considered to be the incremental factor by double or decremented factor by half of light falling on the sensor. Each exposure requires certain amount of lights. If we allow the camera to sense double the amount of required light, the image will be over exposed. Here the image is over exposed by one stop. Similarly if we reduce the light by 50%, the image will be under exposed and will be called under exposed by one stop.

All the three elements of exposure triangle can be adjusted according to the stop value. Let’s understand them independently.

ISO – ISO is basically the sensitivity of light of your sensor which results the exposure of your image. The ISO is measured in numbers typically starts with 100 and continues to be double till the time it reaches the maximum capacity of your camera. 100, 200, 400, 800, 1600, 3200, 6400 etc. by doubling the sensitivity.

By default the camera allows you to change aperture, shutter and ISO in one third incremental.

Understanding of exposure triangle becomes much easier if we understand STOPs.

Since we understand STOP now, let’s understand how exposure triangle works. An exposure is a combination of aperture, shutter and ISO. All the exposure will have these there factor attached to it. For a given amount of light, if any one out of these three changes, one out of balance two or both has to be compensated in order to record the same amount of light. If you decide to increase the shutter speed by one stop, you have to either open the aperture by one stop, or increase ISO by one stop. Or you can adjust balance two by half stop. Let’s understand few examples

Camera indicates correct exposure at f/8, 1/250, ISO 200. To achieve deeper depth of field you want to change the aperture to f/11 (which is exactly one stop smaller). To compensate you have to either decrease shutter speed to 1/125 or increase ISO to 400 (both adjusted by one stop).

Let’s look at more example. Camera indicates correct exposure at f/5.6, 1/125, ISO 100. To freeze the motion of the moving subject you want to change the shutter speed to 1/1000 (which is exactly three stop faster). You are using a lens which f/5.6 as the widest aperture hens you can’t go below it. So you are left with only ISO. Therefore you have to increase the ISO by three stops i.e. 800.

All these three factors of exposure triangle have after effect on the image. Wide aperture will have a shallow depth field. Narrow aperture will have a deep depth of field. Similarly slow shutter speed will blur the subject; Fast shutter speed will freeze the movement of the subject. Base / Lower ISO always give the best possible image quality. The quality deteriorates when we increase the ISO. Therefore ISO should be the last factor to change. The diagram will explain how the element of exposure triangle behaves with the change of its value. 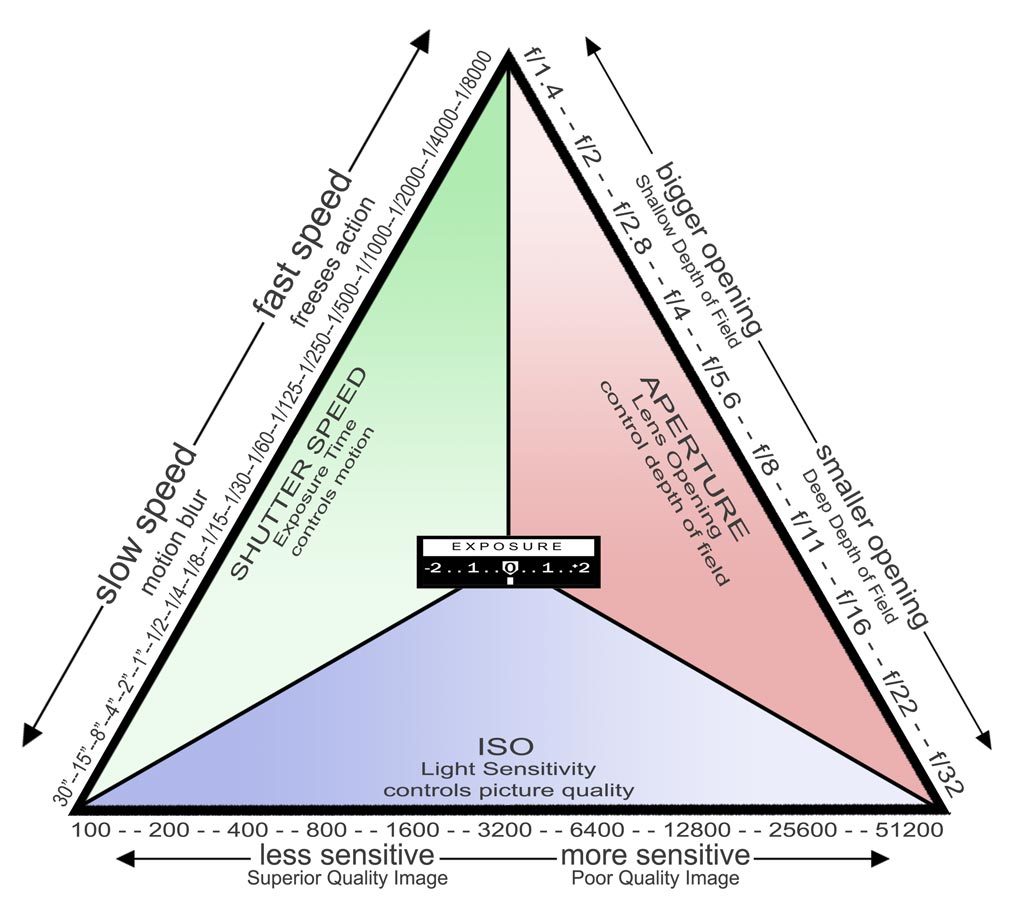 Once you practically understand how the elements of exposure triangle behaves, you can turn your camera to ‘M’ or Manual mode and start experimenting with your exposure in order to achieve desired result.