Kodak Brownie was the first cameras to make photography simpler and accessible to everyone. It had fixed shutter speed camera with no aperture control or focusing abilities Little more than a box with a fake leather exterior for gripping purposes. One of its kind as first point and shoot cameras. 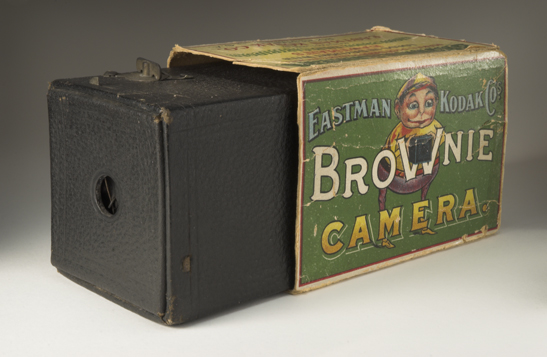 The Kodak “Brownie” camera made its debut at the turn of the twentieth century and sold for one dollar. One hundred thousand of them were purchased during the first year alone. The Brownie helped to put photography into the hands of amateurs and allowed the middle class to take their own “snapshots” as well.

The Brownie is an important camera to the history, by making photography easier for the common man. This tradition would continue to be scoffed by the more bourgeois amongst us with the Canon AE1, the inception of digital photography, and most recently the iPhone working in conjunction with Instagram.

1990,Eastman Kodak introduced the new Brownie dollar box camera ; the release was supported by a major advertising campaign. The name “Brownie” was chosen primarily because of the popularity of a children’s book of cartoons of the same name, and partly because the camera was initially manufactured for Eastman by Frank Brownell of Rochester, New York.